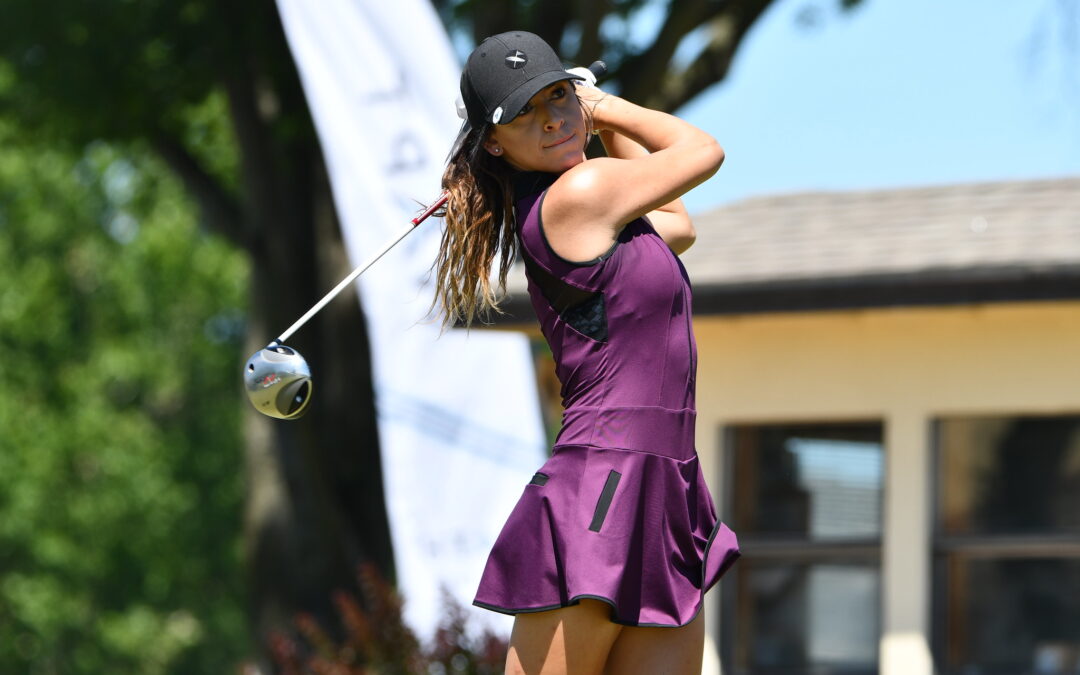 Like many people around the world, Savannah Vilaubi is chasing a dream. What’s hers?  It’s simple, make it to the LPGA Tour.  To some that might sound like a simple goal, but the reality is it’s extremely difficult.  Vilaubi knows that first hand from her playing experiences during the 2019 season as she faced struggles with reaching her own expectations at times.

Vilaubi started this past season on the Ladies’ European Tour where she proved to herself that she can compete with the best golfers in the world.  “I knew the experience of playing on the LET would prepare me for the LPGA, even if the two tours weren’t directly partnered at the time,” said Vilaubi.

The LET was a much bigger tour than she had ever experienced.  The LET allowed for her to learn what it was like to travel internationally while making cuts on a global stage.  However, as the year progressed Vilaubi got caught up in the things she was doing wrong.  “I looked at everything from the perspective of lack,” said Vilaubi.

Vilaubi began to struggle with her mindset.  With high expectations for herself, making the cut was no longer something to celebrate because she ‘should’ make the cut and missing cuts felt like the end of the world.  “I berated myself for mistakes made on the smallest of levels, and I stopped celebrating the little victories,” Vilaubi said.  “I had put so much stress around golf for the sake of wanting to play well that I began to dread leaving for tournaments. I was getting ready to travel for a LET event in Spain, one of the most beautiful and culturally rich places in the world, yet I was standing in LAX in the middle of an anxiety attack fighting back tears for no good reason.”  That trip to Spain would be her final tournament of the 2019 LET season after the unexpected passing of her sponsor.

The page started to flip for Vilaubi as she turned her attention to the Women’s All Pro Tour.  “I’m so grateful for my time on the WAPT because it gave my game momentum again. I was amongst other really talented golfers, and I made friends, many of whom I met in host housing, who were such a positive influence on my energy,” Vilaubi explained.  “The playing environment the WAPT created got me ready for Symetra events and Q-School.”  She began to look at things from a perspective of gratitude and it made all the difference.  Vilaubi made the most of her Symetra Tour start at the Valley Forge Invitational in Pennsylvania, PA finishing T-33 allowing her to be reshuffled into four more events throughout the year.

Vilaubi also saw more success in 2019 when she won the Texas Women’s Open for the second time.  The win earned her an exemption into the LPGA’s Volunteers of America Classic in The Colony, TX.  The VOA Classic proved to be another learning point after Vilaubi missed the cut by one shot.  Vilaubi said, “despite the disappointing missed cut there, I knew I had a job to do at Stage One of Q-School. It was after that failure that I decided I didn’t want to feel bad about golf anymore.”

Vilaubi advanced through the first stage of the LPGA’s Qualifying School all the way to the final stage of the LPGA’s Q-Series in Pinehurst, NC.  At Q-Series her dream was on the line, status on the LPGA.  Vilaubi missed the final cut to play the last two rounds after being assessed a penalty for playing the wrong ball.  Vilaubi explained, “although I looked down and saw the ball in front of me was a ProV1 Titleist 3, I did not confirm that my black line was on it. I incurred a penalty and had to go back to find and play my original ball. It was an honest mistake that could have made the difference in the end, but what I learned from that was to be thorough in everything I do.”  Vilaubi expressed she took the next two days in Pinehurst to actively reflect on what happened saying, “I intentionally felt the sadness, disappointment, anger, and disbelief.”  Vilaubi took that time to come to peace with what happened.  “Not only did I make peace with the fact that these painful experiences were necessary for my future success, I genuinely believed in their lasting impact. There was no more longing for a different result. Wherever I was currently, was exactly right.”  Her finish in Q-Series secured her full-time status on the Symetra Tour for the 2020 season.

After Q-Series, Vilaubi took five weeks off of golf and focused on getting into a routine tending to her mind and body.  Vilaubi described her routine, “I developed a regular workout regimen, I paid close attention to my nutrition, went to regular chiropractic appointments, massages, and made sure that I actually slept.”  She also explained how the time helped her reset and comeback motivated.  “During my time off I also got to spend the holidays with my family, travel with my boyfriend, catch up with my closest friends, and develop a game plan with my team for the year to come. When it finally came time to practice and play again, I felt so rested, inspired, and equipped both physically and mentally to get back into it.”

In golf, you’re playing against yourself just as much as you’re playing against others in the field for the given week.  Vilaubi has since learned to lean on her family to help limit the pressure she puts on herself.  “My family is the most important thing to me and my brother is my favorite person in the whole world. Way above being a golfer, I am his sister; and life has been so good because of him,” she exclaimed.

Vilaubi had her first hole in one in late January at Monarch Beach Golf Links and her brother was there to witness it.  “It was one of the best feelings in the world and my favorite person being there made it even better. We had a celebratory Old Fashioned at sunset and got to soak in the whole day. It’s a memory that will last a lifetime for us both.”

MY FIRST HOLE IN ONE EVER!!😆😂🤪🤩 I told my brother, “Record this in case it goes in…” and then BOOM!!!! 147 yards playing 140: 9 iron. @aaron_vilaubi **Sorry my scream is blood-curdling, I couldn’t contain myself 😂 Thank you @monarchbeachgolflinks for probably the BEST day of my life!!! 😍 My first Hole-in-One, golf with my BEST FRIEND/BROTHER, an amazing lunch at the Monarch Bay Beach Club, some Mindful Meditation, and then drinks overlooking the first tee and ocean! 😍😭❤️ I’m forever grateful for this experience today! 🙏🏼 Thank you SO much!!! #golf #holeinone #palmgolf #swingandsmile #olayasport #surfandturfgolf #golfdress #monarchbeachgolflinks #mariposaclub #reactions #funnyreaction #golfchannel #scream #road2lpga #blackandwhite #girlsthatgolf #par3 #9iron @golfchannel @gcmorningdrive

Knowing the struggles she’s been through, Vilaubi has been working a lot this off-season to prepare for a successful 2020 campaign.  “The biggest part of my game I’ve worked on this off-season has been my mental game. I’ve trained it on the golf course, in the gym, and in the kitchen. I realized more than ever this year how important it is to practice under pressure.”  Vilaubi’s mentality has been, “If you don’t go to the struggle, the struggle will come to you.”  She practices with the intention of running into struggles and pushing through them.  She explained what has been different this off-season compared to those previous is, “I’ve learned to embrace the challenge.”

Vilaubi is aiming high for her 2020 season: “My goal for this 2020 season is to qualify for the LPGA Tour. In my head and in my being, I’ve already accomplished this and I plan to play to that caliber. I aim to win 4 Symetra Tour events and finish in the top 20 every tournament. My goal is to be my own best friend out on the course and set myself up for success with an excellent mental performance every tournament. I know the physical game comes and goes and that life happens sometimes, but my goal is to always have the right attitude in the event that aptitude falls short.”