Alison Muirhead: Living in the Moment 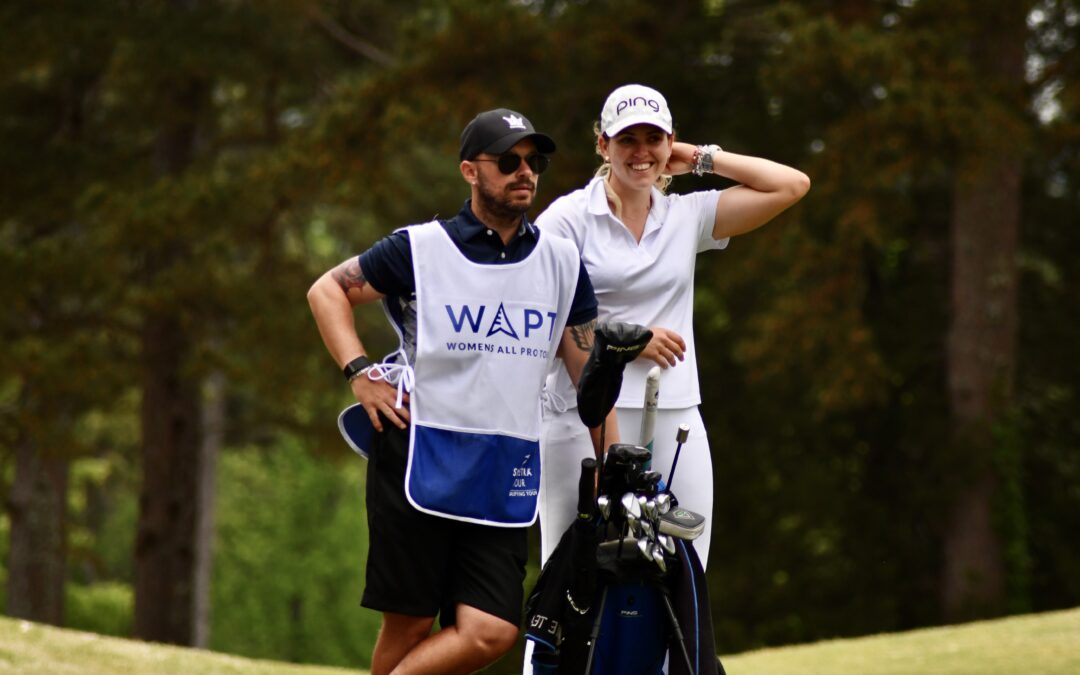 At the Hot Springs Championship, Hot Springs CC (April 28-30), Alison Muirhead fired a 65 (-7) in the opening round to take a three-stroke lead.  After the tournament was shortened to 36 holes because of weather, she had a difficult second round, but birdied her final hole to get into a playoff.  She prevailed over Amanda Kim after two additional holes.

Over her 22 years, Alison Muirhead has enjoyed playing several different sports.  She was proud to be named team captain of her netball team (based on American basketball, but with very different rules – no backboard, passing but no dribbling, seven players on a team with each assigned to different parts of the court).  She also has participated in basketball, swimming, football (the UK version, no shoulder pads involved) and scuba diving.  It all makes sense since Alison’s part of a sporting family.  Her two older sisters competed in equestrian events for years.

Alison’s golf career blends together three things that are very important to her.  “I love to play golf and I love to travel… And to me, family is really, really important.”

Alison began her career in competitive golf fairly early.  In 2015 and 2016, she won the Emirates Junior Open Championship.  In 2016, she was top five in the English Girls Open.  In January, 2020, she qualified for full status on the Ladies European Tour (LET) by having the lowest score in the first phase of qualifying and finishing T2 in the second and final stage.  Later in 2020, she played in eleven LET events, where she had three top-20 finishes.  This year, Alison’s full status on LET could take her to South African, Europe, Scandinavia, Japan, UK, Singapore, Thailand, India and the Middle East (playing in Dubai will be a home game).

All this experience was excellent preparation for Alison’s participation in four events during the early part of the WAPT season.  She was top-ten in the Mackie Construction Championship in Abilene, had an amazing -2 final round in the rain in Wichita Falls to finish T-12, then won in Hot Springs.  “I saw that WAPT was affiliated with Symetra, so I came over…  Everything was so well-organized… I hope it keeps growing… It’s a really, really great tour… I’d love to be back again… come play again and compete.”

Alison also got an early start on another one of her passions – traveling the world.  Although her parents are from the UK, Alison was born in Johannesburg, South Africa.  When she was eight, she moved with her family to Dubai, where she’s lived for the past fifteen years.  The US is one of her favorite countries to visit.  She spent one year playing college golf at Fresno State.  She marvels at how big the country is. (“I’m amazed when other players talk about driving twelve hours.  Where I’ve lived, twelve hours of driving would almost always put you in another country.”)  She’s also enjoyed spending time in Japan (“The cherry blossoms in the spring are just magnificent.”) and returning to her roots in South Africa (“I love the wild life there… plus it’s where I was born.”).  “I really love that I can say, ‘I’ve been to Sweden, I’ve been to Finland’… Not a lot of people can say that… I enjoy that everything’s just so different… outside my comfort zone… pushing myself to different boundaries.”

Alison’s family ties give her strong roots in golf.  Her great-great-grandfather was Captain at Royal Troon, one of the famous Scottish courses that hosts The Open Championship.  Today, family also provides essential travel companionship.  Her mother travels with her regularly. Her Mum’s presence is particularly helpful with car rentals (it can be prohibitively expensive to rent a car when you are not yet 25).  Alison also says that playing golf against family members and close friends hones her competitive edge.  “I’m always wanting to beat my dad… having to give him so many strokes… He brags about it for ages if I don’t beat him… Now, that’s real pressure… I really enjoy it a lot.”  Her family also provides support and encouragement from a distance.  Alison has two aunts who contact her regularly.  The aunts’ five children also take great interest in her accomplishments.  “They all text me all the time…  It’s important to have people behind you, saying you can do it.”

Alison regularly tries to follow her motto:  “trust the process.”  Whether playing recreationally or in the heat of competition, she tries to enjoy each moment.  “You never get it back, so it’s really important to appreciate what’s happening along the way… You learn so much about yourself… about your game.”  Alison’s team provides consistent support.  Her swing coach, Mark Gregson-Walters, her trainer, Alan Walters (yes, they’re brothers) and her caddie Gavin Tullis all work together to keep her fit and focused.

One of Alison’s big dilemmas is which country to represent if she should ever make it into international competition.  Should she play for Dubai (where she lives now), for England (her mother’s native country) or Scotland (where her father grew up) or South Africa (the country of her birth)?  It’s a pleasant problem to contemplate when you’re twenty-two years old and have a promising career ahead of you.