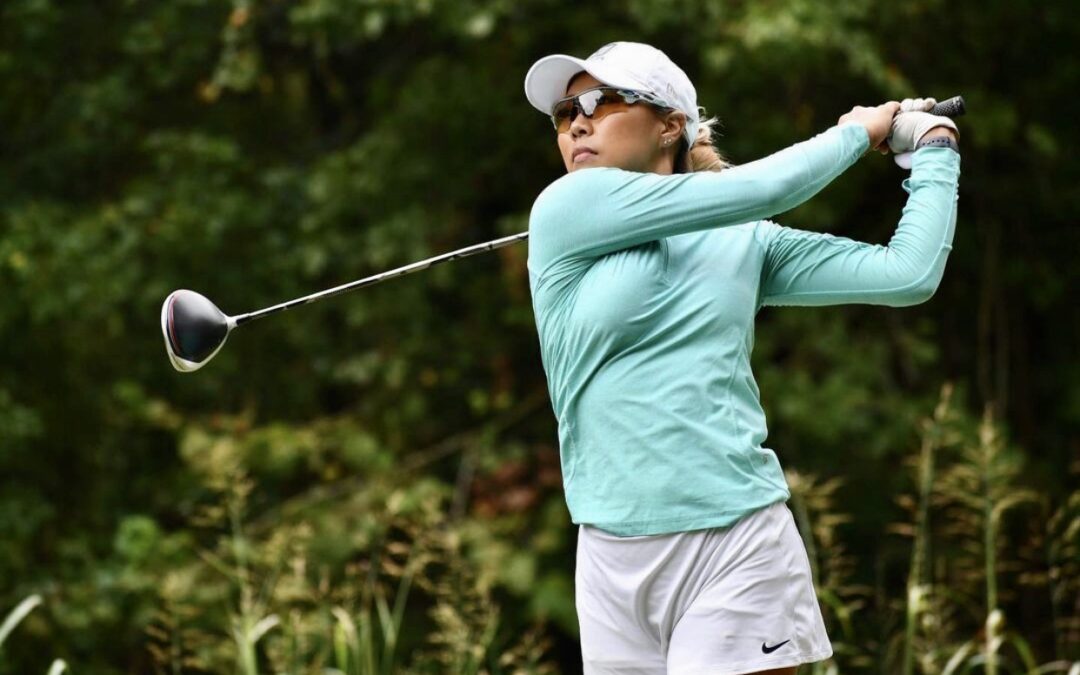 In the Wichita Falls Championship, held April 13-16 at Wichita Falls Country Club, Binny Lee was five strokes back entering the third and final round.  She had seven birdies in her last round, including three in her final four holes to shoot 66 (-5), tying for the lead at -2.  She made birdie to win a one-hole playoff over Selena Costabile.  In her final round, Lee broke the women’s course record she had set in 2010.

Binny comes from a family with an amazing athletic background.  Her parents grew up in Korea.    In 1988, her mother won a gold medal in the Seoul Olympics for the home country in tae kwon do.  Her father was also a national champion in the sport.  In Korea, there is a strong belief that genetics can determine your destiny – if both your parents are great athletes, you can be one, too.  So it was Binny’s parents who evaluated the possible sports career paths for their daughter and decided she should become a professional golfer.  Binny says, “My parents were my coaches growing up… Having athletic parents has not been the easiest, but I wouldn’t be where I am without them…  I grew up fast… I started home schooling when I was in sixth grade” to spend most of her day on golf.  “From sixth grade until I was nineteen or twenty, it was all about golf.  I didn’t have friends.  I just practiced, I worked out…”

Fortunately, Binny developed her own strong passion for golf that has carried her through the endless hours of practicing, playing and training required of any true professional.  Her skill and her commitment powered her to a great junior career playing AJGA events.  She was ranked in the top 20 in the country, was an All-American and was heavily recruited by American universities.  However, rather than going to college, she decided to turn pro at age 18 while playing on the Korean women’s tour.

Around the time she turned pro, Binny took a step that was very unusual for Korean or Korean-American golfers: “I told my parents that I needed them to be my parents, not my coaches.”  From that time forward, she got a coach outside the family and began traveling alone to golf tournaments.  “I travel by myself… I told my parents when I was nineteen, ‘I’m doing this on my own.’”

She also decided to become more well-rounded, Admitting that “it took me a while to… learn to mingle with people my own age,” Binny soon developed a lot of pretty typical interests.  While claiming that “I’m super boring,” she now enjoys spending time with friends and family, she’s become “a huge car person” and “I love watching basketball, especially the NBA.”  Binny believes that having outside interests helps her golf game:  “If you’re making those sacrifices and all you’re doing is golf, you’re going to get burned out eventually… But when you’re confident, you know you’ve put in the part work and it can still be fun [because I enjoy things outside of golf], I think that’s a win/win.”

Binny she gives WAPT a lot of credit for helping her develop by providing high-quality competition.  In 2019, she played in 7 WAPT events, winning one, making top ten in all but one event and being the money leader at the end of the year.  In 2020, she played four events and was top ten in every one.  “WAPT is a great tour… very competitive… The courses that they play are great… A lot of the players are fresh out of college… played at D-1 schools, so they’re really good.”

She’s finding moving up to Symetra and eventually LPGA a challenge.  “It’s a mental thing… I’m not as comfortable out there… There are these small things that I need to figure out… If you put the WAPT people on the LPGA range… it doesn’t look like we’re that far off… We just need to learn to be more consistent and more mentally tough.”

Today, Binny values being able to do things her own way, while still being proudly Asian-American.  She was saddened to see the social media comments after an Asian player, A. Lim Kim, won the 2020 Women’s Open in December while wearing a mask in competition. “People say stupid things… It’s just sad… I think it’s something that needs to be talked about.”  Binny Lee hopes she can play her part in bridging some of these cultural divides: “I appreciate my culture, my background… being confident in who I am… We’re all humans.  We’re all made by God with love.”

When I sat down for a Zoom interview with Binny Lee, she showed up wearing a golf shirt with lots of corporate logos.  When I asked about her corporate sponsorships, she laughed and said the shirt was a gift from her training partner, Jin Young Ko, who is currently #1 in the Rolex Women’s World Golf Ranking.  (“She gets a new wardrobe every season.”)  I found it very funny and a little ironic that she’d be wearing someone else’s clothes, because Binny Lee is a strong, independent woman who’s totally comfortable choosing her own clothes, making her own decisions and living life on her own terms.