Mariel Galdiano: A Model of Consistency 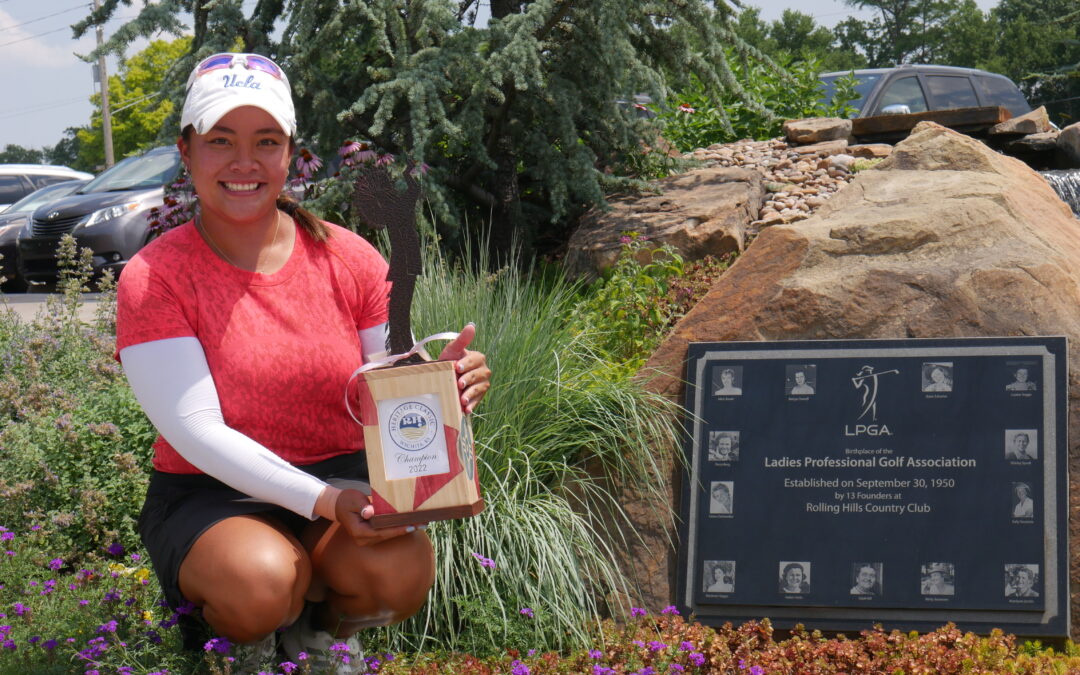 Mariel Galdiano has set an amazing record for consistency during WAPT’s last three events. At
the Merit Health Natchez Classic, she finished T2 behind Erika Smith. She then won the Oscar
Williams Classic at Hurricane Creek by 3 and won the Heritage Classic in Wichita, KS, the
following week by 7. Mariel is the first back-to-back winner during the summer season in the
history of the WAPT. She’s the only player ever to lead eight straight rounds. And her victory
by 7 in Wichita ties her with Kaeli Jones for the largest margin of victory on WAPT. Mariel now
leads the WAPT money list and leads in points for the Race to Stage II.
Mariel Galdiano began her golf journey in kindergarten. She was five years old when her father,
Roger, bought her first set of Little Tikes clubs. As she progressed through junior golf and into
college, Mariel benefitted from being a part of two tradition-rich golf programs.
Born and raised in Hawaii, she began competing in Hawaii State Junior Golf Association events
when she was seven years old. The HSJGA was co-founded by Mary Bea Porter-King, a former
LPGA player who has been the director of the organization since 1999. According to Mariel,
Mrs. Porter-King “paved the way for junior golf… for golf in general, for my generation and for
the generation before us.” The HSJGA sponsors events on different islands throughout Hawaii.
Each year, the Hawaii-based organization hosts a Tournament of Champions on the island of
Maui, sponsored by Michelle Wie West, the most famous product of this junior program.
Mariel also benefitted from playing for the women’s golf program at UCLA from 2016 to 2020.
When asked about her decision to play for the Bruins, she replied, “I fell in love with the
campus. They had so many resources for golf and academics. The weather was perfect and I
was impressed by the number of pros they had on tour, since professional golf was always my
goal.” (Current UCLA alums on LPGA include Patty Tavatanakit, Lilia Vu, Bronte Law, Alison
Lee and Mo Martin. During her sophomore year, Mariel’s team was ranked #1 in the country.
“We had a really close-knit team… Beth Wu, Lilia Vu (who won three events on Symetra in
2021), Patty Tavatanakit, Clare Legaspi… We were more than teammates, we were best friends
who motivated each other.”
While at UCLA, Mariel also enjoyed her time away from golf. “I majored in Sociology… and took
Psychology courses on the side.” As she looks back on her time at UCLA, she wishes she’d
had time to pursue some of her other interests. “I wish I could have taken more art classes…
painting, sculpture.”
Mariel has shown some of her artistic creativity on the golf course. But the biggest improvement
for her in competition has been confidence. “A little more self-belief…I think sometimes we hold
ourselves back by doubting ourselves… We’re held back by fear… This year, I decided I was
going to play like I have nothing to lose, just go for it.”
“Getting your first win is always the toughest… During the final round at Natchez, I could feel it
slipping through my fingers. That’s the worst feeling ever. I used that as motivation for the next
event. I said to myself, ‘I’m pressing the gas pedal.’ There are a lot of very good players on
WAPT. You always have to keep moving forward.”

Mariel credits her dad, Roger, for contributing to her success. “My dad has been a huge help…
caddying for me, encouraging me… He knows my clubs and my swing, and it’s just nice having
someone there.”
Relationships are very important to Mariel. After golf, she hopes to be “surrounded by the
people I love the most… I’ve always missed so many big events, like birthdays, and just
hanging out with friends. After golf, I’d like to make up for lost time.” She also wants to help
other people, now and in the future. “During the off season last year, I met a girl who’s a good
golfer in high school. I became a mentor for her, a big sister. I helped her through the recruiting
process… I consider them my family now.”
Mariel is a model of consistency on the golf course these days and a good friend and role model
when she’s away from the game.